A Study Partnership In High-Quality Arts For Older Adults

A Study Partnership In High-Quality Arts For Older Adults

The elderly man did not speak, did not speak at all – in those suffering from dementia, language ability can be a great difficulty. In the room with the silent man a musician played an old, popular tune among the guests.

An incredulous caretaker began to ask the man about his memories of the song. The man’s demeanor opened, and he delighted in sharing his mind’s eye recollections of the time when that song was popular. 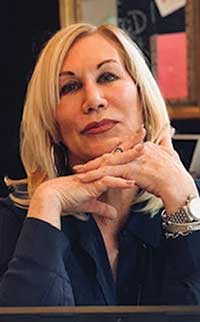 This was not a miracle, but the product of a study partnership. Conducted by University of Scranton professor Dr. Catherine Cullen in conjunction with Scranton’s Everhart Museum and Wesley Village in Pittston, the project delves into the effect of arts on loneliness in older adults with early stage Alzheimer’s disease.  The study uses a multi-faceted approach, including music, poetry and images of classical art in a coordinated effort by artist-in-residence Elizabeth Faust, who guides the artistic process with the Wesley participants. “They are working with professional Pennsylvania Council of the Arts artists,” says lead investigator Dr. Cullen.

As a full-time faculty member at The University of Scranton, Dr. Cullen is required to conduct research and publish her findings. Her interest in arts education (Dr. Cullen consulted for the Pennsylvania Council on the Arts for 20 years) compelled her to think about how older adults could benefit from arts education. A conference between Dr. Cullen and the Everhart Museum yielded, “Everhart Connects,” the main component of which was to place an artist-in-residence in the Wesley Village assisted living facility. This program aims to serve aging patients suffering from early-stage Alzheimer’s disease and other forms of dementia. The three year study was funded initially by the Everhart with additional funding from United Methodist Homes Wesley Village, and the Pennsylvania Council on the Arts.

Kathy Bell, Everhart’s Director of Development, explains that artifacts borrowed from the museum collection are used by Ms. Faust to awaken in participants, “A glimmer that they are still there,” Ms. Bell says, “the person that they used to be — taking them out of isolation.” The socializing, singing and laughing while making art sometimes triggers vivid, articulate memories in those sharing in the project. The participants include not only the residents of Wesley Village, but also their caregivers. Each session centers on the Everhart’s collection, and each artist who represents a different medium utilizes the museum artifacts to evoke memory and cognitive functioning in the patients along with inspiring their caregivers.

During a typical session, residents may sit in a circle facing a PowerPoint of French Impressionist art while the live music of a bass fiddle plays in the background. The participants listen attentively to poetry reading, and occasionally break into songs sung in unison. Other times will find participants working on communal collages, pasting, cutting out images and coloring. Wesley recreational coordinator, Rachel Loefflad remarks how residents talk throughout the day about what they did in art.

Dr. Cullen proposed high-quality programming, cognitively challenging and stimulating, should be offered to the older adults who seek to improve their lives and engage with others. She reported elderly patients who were exposed to visual images as a catalyst for discussion were shown to open up to caretakers regarding past life experiences and feelings. Ms. Bell continues that the study will add to the body of research on non-pharmaceutical therapies enhancing the lives of older adults.

The present study at Wesley is not Dr. Cullen’s sole project now in effect; it is one of several in a new Pennsylvania Council on the Arts initiative called “Creative Aging,” and is focused on bringing forward excellence in arts education for older adults.

The study being conducted with Everhart, which is in year two of its three year run, is one of five studies into the effect of arts on loneliness in the elderly currently underway by Dr. Cullen. Scranton’s Gino J. Merli Veterans’ Center hosts resident artist Earl Lehman: Vietnam veteran, visual artist and Kutztown grad who has been conducting art residencies since 1982.

In a previous Pennsylvania State level study conducted by Dr. Cullen, the research question asked if there was significant decrease in self-reported loneliness in senior citizens following participation in an artist in residence program.

The results from that previous study engendered this new study. Using scientific method of making predictions and exhibiting reproducible results, the pretest and post-test data was gleaned using the UCLA Loneliness Scale, a highly regarded measure of self-reported loneliness.

Research suggests that loneliness may be the product of misread social cues, and not necessarily poor social skills, as previously thought. The lonely seem to be more likely to infer negative meaning into ambiguous situations, which in turn can increase their sense of loneliness. “The fact that older people experience feelings of loneliness and social isolation has been revealed in the research and in this study,” says Dr. Cullen. Loneliness has been linked to physical illness and cognitive decline, and is a predictor of early death greater than obesity.

More than 40 years of research indicates arts programs produce physical and mental health benefits, including diminished loneliness, in the elderly. Nevertheless, the current body of literature does not address the effect of arts learning on those suffering from early stage Alzheimer’s and other forms of dementia. The fact that the Everhart/ Wesley study has a three year duration will prove valuable in its validity.

“Although recreational activities in centers such as bingo, craft making, and sing-alongs can be stimulating,” Dr. Cullen reported, “they may not provide the cognitive and creative stimulation inherent in arts learning. The participants in this study indicated that they were less lonely after working with artists in the program. Because the arts inherently engage people in collaboration and cooperative processes… they may develop important relationships and friendships that could have a positive effect on their emotional and social health.”

“What we are doing with older adults and their caregivers is what they deserve,” says Dr. Cullen. “We provide high quality arts programming and opportunity for all participants.” –Kevin Conroy